From the Dean’s Desk

The Faculty of Humanities is one of the foundation faculties. It metamorphosed from the School of Arts to the School of Languages and Arts to its present status.

The Faculty believes in “Excellence, Integrity and Service” reflecting the motto of the University. It has made enormous contributions as far as the growth of the University is concerned. It has produced many students who have made giant strides in academia and other human endeavours.

The Faculty has also excelled in the area of research. It floated the ICHEKE Journal which existed as JEFFLIN and OWU when the faculty existed as the School of Languages and School of Arts respectively since 1993 and has been sustained till date. The Faculty has added two new journals; South-South Journal of Humanities and International Studies and Niger Delta Journal of Gender Peace and Conflict Studies, and the Departmental journal titled the Port Harcourt Journal of History and Diplomatic Studies.

Furthermore, it has organised several academic fora such as the conference which took place on Monday, 17th June, 2013 Inter-alia. In the area of workshops, the Faculty organised workshops in result computation and curriculum vitae writing in 2012. It also successfully organised its second International Conference with the theme: The Humanities and National Development in the New Normal, in November, 2021.

Students of the Faculty have also made enviable progress in national competitions in June, 2012 and recently, the All South-South Debate at the University of Calabar where the students of the Department of English won the runners-up award. The Faculty has also produced three overall best graduating students in the Departments of English and Communication Art, French and International Studies, and Music.

Currently, the Faculty has five departments. They are the Departments of English and Communication Art, Fine and Applied Arts, French and International Studies, History and Diplomatic Studies, Music, Religious and Cultural Studies and Theatre and Film Studies. Also, there are plans to introduce departments like Linguistics and Nigerian Languages and Mass Communication. The Faculty currently has the following number of Professors;

In line with the University’s motto (Excellence Integrity and Service), the philosophy of the Faculty is thus anchored on the desire to build a Faculty that shall be the flagship for the training of teachers at the University level for Rivers State in particular and Nigeria in general. The Professional instructional activities at the Faculty shall be anchored on the pursuit of excellence in the academic programmes offered in the Faculty.

Thus, the philosophy is anchored on the design and implementation of research programmes that shall enhance, upgrade, and add value to education and the teaching profession. Given that the needs of society are multifaceted, the philosophy of the Faculty is also to provide teaching and research in selected disciplines such as English Studies, French and other foreign languages, History and Diplomatic Studies, Music, Religious and Cultural Studies, etc. that shall make the Faculty contribute most meaningfully to the holistic growth and development of Rivers State.

This is hinged on the universal principles of justice, equity, fairness and freedom that knowledge and education provide for mankind. The main ethos of the Faculty, therefore, is the search for knowledge and its impartation through teaching, research and community service, thereby creating a Faculty that is not just merely well recognized for its academic achievements but is also a partner with the Government and the private sector to enhance the rapid socio-economic transformation of the society. 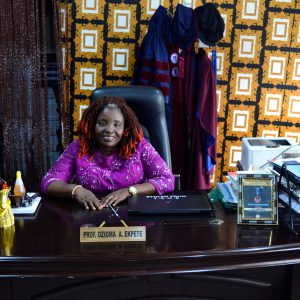 Professor Kingdom E.Orji, FHSN
Prof.Orji is the current Dean, Faculty of Humanities, Ignatius Ajuru University of Education, Rumuolumeni, PortHarcourt, Rivers State. He iis a Professor of African History. He holds B.A History (1986), PGDE (2011), M.A History (1989), PhD History (1996). Prof.Orji is an indigene of Omoku in Ogba/Egbema/ Nd on I Local Government Area of Rivers State. He is a Professor of African History. He attended People’s State School, Omoku from 1970-1974, Sancta Maria High School, Omoku from 1974-1979 , University of PortHarcourt, 1982-1986, 1987-1989, 1990-1996. Prof. Orji is a Fellow of Historical Society of Nigeria. He once represented the Senate of his University in the 10th Governing Council. He has more than 65 publications in reputable national and international journals in addition to his active participation in local & international conferences where sound academic papers were presented & discussed.Prof. Orji; enjoys marital bliss with his dear wife Edith and they are blessed with three children David, Stephen & Caleb. 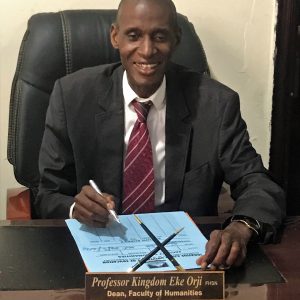